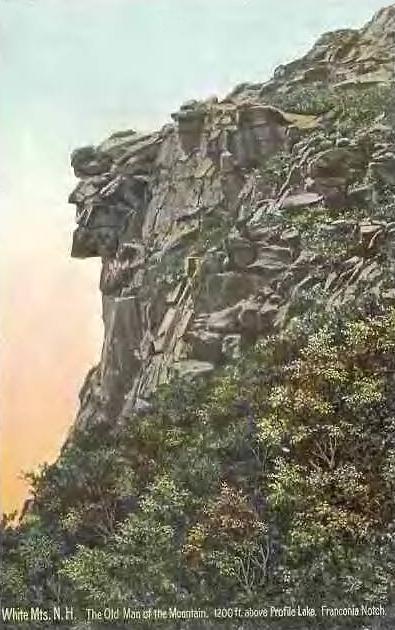 Talk about a cliffhanger.

I didn’t set out to make readers wait three months for the conclusion of “Still Life,” a spinoff tale about Mia Bailey, a secondary DELIVER HER character who refused to give up the ghost.

But as it happened, life intervened—in the form of family demands, developmental edits for my next book, another go at NaNoWriMo. I’m grateful for your patience, and now present, to quote the late American radio host Paul Harvey, the rest of the story:

Synopsis of Parts 1 and 2: Mia Bailey weighs a troubling request from her imprisoned birth father while coping with her adoptive father’s obsession with a New Hampshire landmark. At this point, Mia’s faith in Camden Bailey’s crusade to save The Old Man of the Mountain had begun to crumble, much in the manner of Great Stone Face himself.

Recalling our quiet drive home, I regret now I did not remind him that the Old Man of the Mountain did exist, etched on our license plates and road signs, onto both sides of the New Hampshire quarter. Granite State fourth graders proudly recited the legend of his caretakers, the list of literary works inspired by his curt jaw.

The evidence was all around us: a living, breathing civics lesson.

He didn’t often miss our family meal, but that night the society’s trustees would convene. As my mother chopped salad, I swung our conversation around, concocting an ethics class death penalty debate so I could ask her if God could forgive a sin like Felix Delgado’s.

Her face darkened, the blade striking butcher block like a gunshot. “Even God has limits, Mia. The only good that ever came from that man was you.”

Her position clear, I chose not to burden her, retreating to my studio to work on my next assignment, a still life. As the night burned, the mongoose’s ragged strokes on my canvas bore no resemblance to the tranquil fruit platter before me. So absorbed was I that at the sharp rap on the glass, my brush skidded off the canvas, leaving a great gash across my work like an open wound, the mongoose dropping to the stone floor.

My father’s appearance was a surprise; he rarely ventured down the steep path without checking first. A person deserves privacy, he said. Inside, he pushed past me, agitated, halting in front of my easel. “It’s over, Mia. The monument. The committee. Everything.” The society had voted to dissolve; no more fundraising, no visitors’ center, no 20-foot granite monolith. “People won’t put their faith in something they can’t see.”

I stroked the nubbly thermal of his arm, murmuring comforts. Though I ached for him, I understood. You couldn’t go back in time. Or change the past.

Sighing, he noticed the paintbrush on the floor and picked it up, cocking his head to study my painting. “This one doesn’t seem like you, Mia.”

I could only shrug. He was right; a stranger might have painted this piece.

“Doesn’t matter,” he said, slinging an arm around me. “You’ll work it out. Whatever it is.”

“I’m trying.” It was hard to swallow, suddenly; the studio’s glass walls oppressed. Accepting the mongoose he offered, I rolled its wooden workhorse body between my palms. “Dad, I don’t know what to do.”

It was so easy to tell him about Felix Delgado and his demons. He stroked his chin as he listened. “Seems like the man wants to clear his conscience before he goes to his maker. A selfish thing to ask of a child.”

“You’re my child. But if you want to do this, I’m with you.” He suggested we visit the prison the next day.

And so it was decided. Removing the damp painting from the easel, I set a fresh canvas in its place. Studio lights dimmed, we climbed the rocky path back up to Swiftriver.

By three o’clock the next afternoon, most of Route 93 was behind us. We drove under a spring sky bruised purple, having made separate, tacit excuses to my mother, the visitors’ lot deserted when we arrived. Passing through the metal detector, I gave no thought to whether my pants swished or clung or violated in some other fashion. An officer shut us into a small windowless room with four folding chairs. We sat in two of them, my eyes drawn to the yellowed ceiling, where a rusty kidney-shaped stain threatened to bleed onto a neighboring tile.

When the door opened, I jumped. The caseworker introduced herself, then the balding prison chaplain behind her, the two dragging the remaining chairs to face us, leaving no place for Felix Delgado. My father cupped my knee territorially.

The caseworker turned to the chaplain. “So. Reverend, could you…”

“Of course.” He cleared his throat. “Miss Bailey, Mr. Bailey. I’ve been meeting with your—Mr. Delgado—for a few months now. I planned to bring him here today.” He ran a finger under his collar. “Sadly, when I arrived at Felix’s cell after lunch, he was…that is, he had already passed.”

Stricken, I turned to my father. “How could he…?”

“You should have let us know,” my father said.

The caseworker leaned forward. “You were on your way by then. I thought I should tell you in person.”

“Felix was quite comfortable at the end,” the chaplain added. “He didn’t suffer.”

The chaplain jumped up. “There was also this.” He held out a worn mahogany bible, its spine reinforced with duct tape. “Felix wanted Maria to have it.” Numb, I took the book, flipping through its soft pages, past folded-down corners and scripture passages underlined in thick pencil, the motion causing some papers tucked inside to flutter to the floor. I knelt to collect them: a laminated Serenity Prayer; a yellowed clipping of an art award I won in high school; a rough-edged photograph of me as a toddler, birthday hat tipped rakishly, a womanly arm encircling my waist, a celebration I could not recall.

My father helped me to my feet and led me toward the door.

We were frisked at the exit. Felix Delgado’s bible made the cut. On the ride back to Swiftriver, his scripture balanced on my knees, it began to snow—a weighty, unseasonable blanket that threatened to reduce the delicate roadside blooms to a memory.

Back in my studio, my father fed the woodburning stove while I opened the bible to a heavily underlined passage from Luke: “But when these things begin to take place, straighten up and lift up your heads, because your redemption is drawing near.”

I cried then, for the toddler in the birthday hat, mourning her lost embrace. My father stroked my hair, and I dried my tears on his shirt’s flannel comfort.

When I eventually looked up, a rare resignation etched his face. Remembering his loss, I intertwined my fingers in his.

“You did everything you could, Dad.”

“I wish I could have spared you that, Mia.”

I kept that promise. That fall, on my first break from my New York studies, we drove to the scenic overlook. I peered into the viewfinder, squinting until the real and imagined on that distant notch became one; when finally, I perceived everything through his eyes.

Read Part 1 of “Resurrecting a Darling”

Read Part 2 of “Resurrecting a Darling”