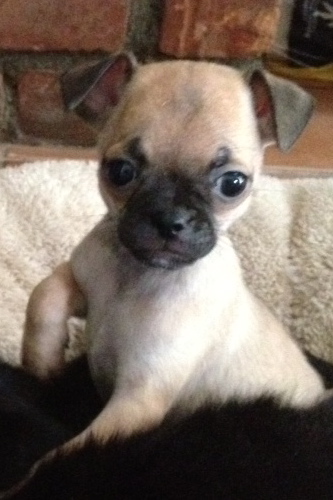 My daughter was getting a puppy, she announced over dinner the other night, a chug — a winsome mix of chihuahua and pug. She produced a picture; we oohed and aahhed over its black-brown cuteness, studying it from all angles, suggesting names. Prudence? Dahlia? Stella? No, she said. Every dog in Brooklyn is named Stella. She would know what to name it once she picked her up.

Names are so personal — the names we choose for our children, our pets, the characters in our stories. Who knows where they come from? Some people, even some authors, I imagine, collect names like coins or seashells, zealously guarding them for a rainy day. Some names pop into our heads, others we blatantly steal from real life. I once ripped a page out of my niece’s First Holy Communion program because some of the names seemed destined for a page in a future story.

Names take on a particular urgency during pregnancy, second in importance only to your due date. When I was expecting my second daughter, it seemed that all my friends were pregnant, or trying to be. We did not have the guidance of the mommy bloggers back then; we only had each other. I called my best friend to share the news. We both had daughters; I knew she wanted a second child.

“Congratulations,” she said, then added warily, “Got any names picked out?”

“Really? Are you pregnant, too?” I was ready to duke it out with her, compare conception dates if necessary, if that’s what it took to claim the moniker for my unborn child.

“No, but I’ve had that name picked out for a long time.”

Great minds think alike? Perhaps. I claimed the name came to me as pure inspiration. But we both were avid viewers at the time of “One Life to Live,” a soap opera featuring a feisty fictional character named Nora Gannon, played by Hillary B. Smith. Nora was an attorney who endured it all: a brain tumor, train wreck, multiple marriages. It was your typical soap stuff, but Nora Gannon always came back fighting.

I gave birth first, which ended the argument. And happily, my friend had her second daughter a year later. And did not name her Nora. And only a year ago, I learned that one of the 18 siblings of my late grandmother had been named Nora, a twin who died in her first year. This discovery that further endeared the name to me.

All this to say that the same sensitivities apply, I believe, when we name the characters in our stories.
Once we give our characters a name and a voice on paper, it’s not unlike the onset of a pregnancy. We may wait a while before socializing the information, eventually share it with a few close friends. But until the birth announcement (i.e. publication), it can be disconcerting to see a character’s name jump out at you from somewhere other than your own page.

This has happened to me twice in the last few weeks. First, nearing the end of a current best seller, a secondary character reveals something about herself that involves the name of a main character in my novel, DELIVER HER.

No, I cried to myself, to the author. How can this be? Everyone will think I stole it.

Then, a couple of days later, a minor celebrity gave birth, giving her son the name of another of my characters. Foul! I call again.

(Notice that even now I am not sharing the names of my characters.)

Once I’m calm, I remind myself that few if any future readers will make this connection. And even if they did, would it matter? Hopefully the story I weave around my characters will give them their own identity.

Like a wise woman once told me when we were struggling with infertility the first time around, when the news of every pregnancy inflicted physical pain: “Remember, they’re not having your baby,” she said.

She was right then, and now. My novel is my baby, and no one, no matter what they’re named, can take that away from me.

One thought on “Protective Custody: Naming Your Characters (and Your Dogs)”